Aubrey Rix (1915 – 2002) was a prolific British illustrator, creating gorgeous magazine and fashion illustrations from the late 1940s until the 1960s. By all accounts he was a great ‘lover’ of women; perhaps some of this passion shows through in his glamourous, stunning and enchanting illustrations.

Rix’s breakthrough came in the late 1940s when he created some cover art for Woman’s Own magazine. At this time, the covers were still created through illustration. In the 1950s, cover illustrations were replaced by photographs of models and upcoming film stars: the illustrations were confined to the inside pages.

Yet this was still an era in which these types of pictures took pride of place. Yesterday, I featured some of the pictures from some spring editions of Woman’s Own in 1952. Later in the evening, I noticed that the first page of one edition featured Aubrey Rix in their ‘Between Friends’ section.

Nowadays, illustrators would not be given such a prominent place within the opening pages of a magazine. It seems a shame really.

In Rox’s heyday, he lived a fabulously opulent lifestyle, owning houses in London and Spain, driving a Rolls Royce and mixing with members of showbiz. However, in the 1960s, he decided to license his work to be used by Letraset, allowing people to buy their own transfers of his art and create their own Rix image for free. By all accounts, this seems to have reduced his extravagant lifestyle yet Rix was without regret for the decision.

For the interest of Aubrey Rix fans and collectors, I have reproduced the text of the ‘Between Friends’ article below. I hope you enjoy reading it!

“No doubt, you have already noticed Rix’s striking illustration to ‘Heartbreak for One,’ Lia Nash’s story of young love, on pages 18 and 19. Your attention having been captured there, perhaps you have gone on to read the story before turning back, now, to ‘Between Friends.’

We know how easily that can happen. Although this is the first page in the magazine, it must often take second place to attractions that meet your eye as you turn the pages.

That picture by Aubrey Rix had a similar effect on us in this office. It reminded us, first, that it was nearly a year since we were telling you about Aubrey’s marriage to Gunilla Casparsson, the beautiful Swedish girl. 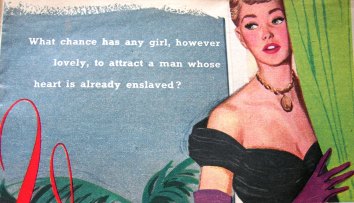 Then someone said: ‘We ought to have a picture of the Rix’s at home.’

When we arrived, with a photographer, at the Rix’s flat in Knightsbridge, our knock on the door was answered by a loud staccato bark inside.

‘Down, Beau; good boy, Beau,’ said Rix’s voice, and the door was opened, to reveal Rix, smiling and extending a friendly hand, and Beau, a white Sealyham with a large black spot, wagging a friendly tail.

‘My secretary,’ said Rix, introducing us. ‘It’s his job to bark when the ‘phone rings or anyone knocks at the door or when anyone tries to interrupt me when I am working in the studio.

Beau has been with Rix eight years and is one of the most travelled dogs in the world, with happy memories of Cuba, Jamaica, Florida, and many continental countries. The only dull periods of his career have been the months he had to spend in quarantine in various countries.

Gunilla came in – the fair haired beauty you have seen in so many of Rix’s covers, posters and story illustrations. It was easy to see that Beau adored her. Although he had been Rix’s companion for many years, he had welcomed the newcomer as if he had known her all his life. 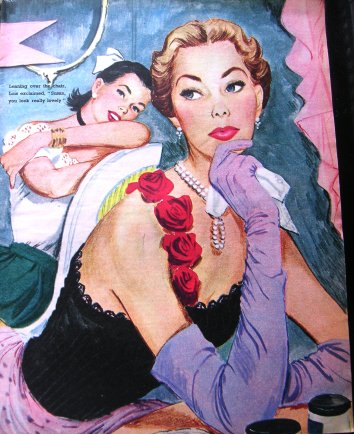 ‘I believe she fell in love with the dog first,’ said Aubrey. ‘Then she began to take notice of me.’

What Beau doesn’t know, but Gunilla told us, is that there soon will be another newcomer in the Rix household.

While we were in Rix’s studio he made a quick sketch of Beau – we reproduce it for you here. [See illustrations above]” (Woman’s Own, April 10th, 1952)

I’ve actually read the story for the illustration above. It’s about a girl called Sarah Coates who moves into a little apartment, starts seeing a work colleague  – Ted – who then promptly jets off on holiday for two months. In the meantime, Sarah takes pity on a neighbour, Alec Barlow, and invites him round. Various liaisons ensue, most of which result in either Alec borrowing money from Sarah or burning her pots and pans. However, for some inexplicable reason, she begins to develop feelings for him. Once Ted returns, Sarah lets him know she has met someone else. Luckily, it turns out that Alec is a secret millionaire so it didn’t matter that he borrowed money from her all along. Or burnt her pots.

On Rix’s death in 2002, the Telegraph published a short obituary about him. In it, the ‘Rix face’ is described:

“If he was drawing a woman, she had beautiful eyes with a small nose, and a face of the kind associated with Sophia Loren; if it was a man, he was clearly related, but with a reassuringly square jaw.” (The Telegraph, 18th June, 2002)

Funnily enough, I would say that the man in this picture most definitely does not have a clever face, nor a reassuringly square jaw! The women are still as glamourous as ever though; despite the girl at the back laughing like a flirty floozy at the seedy man.

While I think about it, one of the magazines I was reading yesterday mentioned the use of the word ‘flirt’ and commented that it no longer meant the same as that ‘sweetly antiquated term of our grandmothers’. Somehow, I never thought of the word ‘flirt’ as being an old one; my presumption was that it was a more contemporary creation. Nor could I imagine women at the turn of the 20th century using it.

These illustrations by Rix are to accompany a three-part series by Daphne du Maurier. Unfortunately, I don’t appear to have the third part of the story, so unless I find it at a later date then the trio remains incomplete for me. I adore these two pictures so I’ll definitely be reading the first two parts. Perhaps I should start looking for the final edition now.

As you look through these pictures, you can start to see the resemblance between the women; inspired, as Woman’s Own suggested, by his new wife, Gunilla.

For the majority of his working life, Rix worked for Artist Partners. They are still operating and retain a simple page in tribute to Rix’s work. It seems there is scant little information about Rix to be found; hence why I wanted to share the little I snippet I had found here. Another ‘Between Friends’ is featured here, an interesting comparison as it show Rix at the start of his career.

All pictures come from my own copies of Woman’s Own from 1952. I don’t mind anyone using them, but please do let me know if you do.

Thanks to ‘Lifestyle Illustrations of the 60s’ Edited by Rian Hughes, text by David Roach for the biographical details.