Before Corliss was born, Aidan and I knew we wanted to create a really bright and cheerful room for the baby. We had decided not to find out whether the baby was going to be a boy or a girl, but we were never going to be going down the whole ‘pink is for girls, 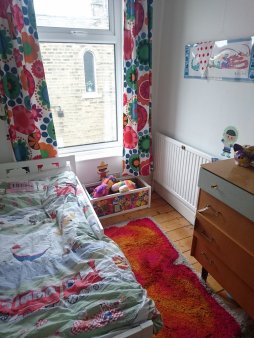 blue is for boys’ road anyway. We went with quite standard and unisex white walls and a wooden floor, and at the time, we had a lime green cot and a blue lampshade meant to look like clouds from Ikea. And, oh how we loved that bedroom! We also had this fantastic rocking chair from Habitat, that was a very modern style, wooden with the fuchsia pink cushions. I say it’s fuchsia pink, Aidan says it’s purple. Well, it may be his favourite colour, but I still think I’m right…

Anyway, once Corliss moved up into a proper bed, the fuchsia pink colour stayed on as the main colour for the bedroom. At least, in my mind it had. We went back to Ikea last year to get the   fabric for Aidan to make the curtains. I was trying to look for something that would look good with the rugs, which we already had down. Aidan was picking out all blues and greens, and I was trying to say to him that they wouldn’t go and it would be too many different colours to add in… after twenty minutes of getting exasperated with each others choices, I realised. He couldn’t remember what colour the rugs were. He absolutely swore blind they were blue and green. You can see from the picture: they’re not. To give him his credit, once we’d actually decided on the fabric, he did make a particularly good pair of curtains. 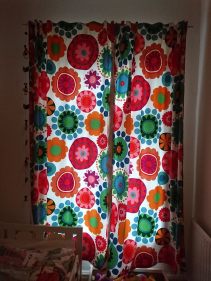 I do really love this room. I posted a picture of it up on my Instagram account this week, and commented that I think it’s my favourite in the house. Not only does it hold lovely memories for me (going in there at 39 weeks pregnant to find that Aidan had built the cot without telling me) but it feels nice and relaxing, despite the bright colours. We both have an interest in interior design, not that you would always know this by the unkempt state of my house at times… I described it once as ‘bourgeois squalor’ to my sister. I think that sums it up nicely. But this interest manifest itself in taking ages in picking things to go in rooms, being picky but not snobby and trying to things that are either a little bit unique or at least have something interesting about them. There’s a mix and match of old and new within this room that sums up our taste perfectly. 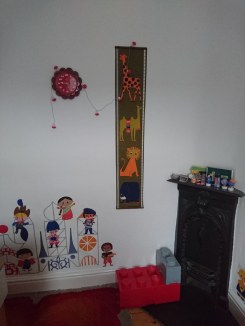 The old fireplace was there when we moved in, and fortunately both kids have understood the imperative of ‘Not to touch!’ as the front of it isn’t attached, is fairly heavy and will drop off at any slight amount of pressure. You can just see on the top of the shelf there all of Corliss’ ornaments and knick-knacks. She seems to have picked up our love for collecting bits and bobs. There’s a picture of her name made from Scrabble pieces that one of our friends made her for her first birthday; sand art bottles; clay pots Corliss has made at pre-school, a Carlton Ware money box; Little Miss figurines that another friend gave to her for Christmas. The Lego boxes on the floor are invaluable for housing all of the massive collection of Lego we have. We found a huge box full of Lego Friends for a tenner last year – there’s at least twenty sets in there, I’m not sure how many as I never finished sorting them all out. The clock came from Germany from a flea market, the wall hanging… hmmm, where did we buy that wall hanging from? I can’t remember, from a vintage shop on one of our family holidays but the exact place escapes my mind. The wall stickers are from a Disney set that were originally created for the 1964 New York World’s Fair. These are modern reproductions, but they look fantastic, in my opinion. 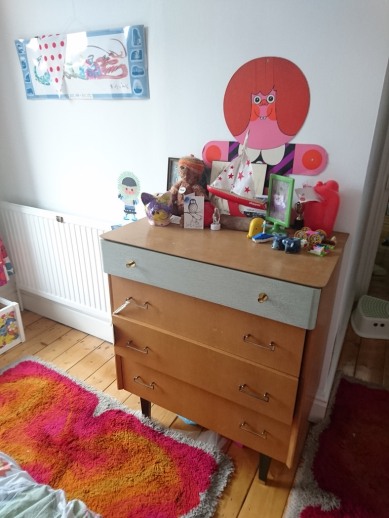 More knick-knacks! Little models she’s made from Lego, a Steiff teddy given to her by another friend at Christmas, money box from one of those pot-painting places in Amerton, Staffordshire, a retro bin, a wooden model boat (probably her favourite thing) and a retro cardboard picture of a child. I used to have that in my classroom, along with some other ones that I’d dotted about. The picture on the wall is Corliss’ name painted by a street artist in China which my parents brought back from her earlier in the year. The rugs are gorgeous – mid century rugs bought in Germany. They took a lot of cleaning to get them into good enough condition to go in here. We’ve got a few others in the same range in different shapes. I think eventually, a large, round version we have will get used elsewhere. For now, the smaller ones look pretty cool in here. The chest of drawers came from, I’m pretty sure, the same place as the wall hanging. I remember buying them together, but not where from.

A cautionary tale about these types of drawers in a kid’s room: screw them to the wall. We didn’t realise it, but these could easily overbalance when the drawers are opened. In fact, they did open and fall over on top of Corliss. She was absolutely fine; luckily, the way they landed meant not all of the weight went on top of her. But the image of her underneath them still sticks with me and I would strongly advise any parent to screw their drawers to the wall in rooms where kids are going to be. 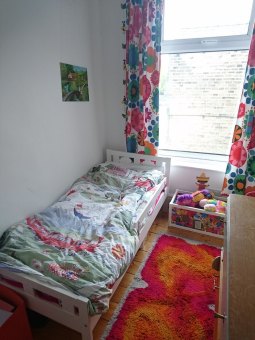 I’m sure professional picture takes and blog writers would probably iron their bedding before taking pictures of it… I don’t have time for that! You can see one of Corliss’ pictures on the wall here that she asked her dad to put up for her. It’s a really rubbish amateur picture that came out of the middle of a frame that I was selling on eBay. Corliss took a fancy to the picture and decided she wanted it up. She thinks it’s a picture from Mary Poppins as it looks a bit like the part in the film where they go into the chalk drawing. There are some more pictures dotted around, including a couple by Anne Grahame Johnstone. But because we’re so rubbish at getting round to doing things like putting up pictures, I just hung them on nails that were already up in the room… so they’re hanging up about a foot away from the ceiling. We will get round to changing them one day. I’m trying to persuade Aidan we should hang up a higgledy-piggledy cluster of pictures on the wall, but because it’s a fashionable thing to do right now, then obviously he doesn’t want to. Will keep working on him with that because I think it would look good on that big wall.

The room is a very strange shape, thanks to some crazy DIY shenanigans done by previous owners in the late ’70s and early ’80s. A chunk of the original room has been given over to the bathroom, so there’s a bit of a corridor at the entrance to it. It is a small room overall, so we have to be careful what goes in there. There are storage boxes underneath the bed; anything she’s not currently wearing gets hung up in another bedroom and we tend to keep it as tidy as possible just because it is so limited for space.

Eventually, we plan on moving Corliss into a bigger room but for now, she has a bright little haven where she can play with her ‘tiny Lego’ as she still calls it and enjoy her bedtimes. If I ever get our own bedroom tidy enough, perhaps I’ll show that one day. I’d love to share pictures of the dining room, A.K.A. the Diamond Room, but that is currently the eBay dumping ground and not suitable for public viewing! 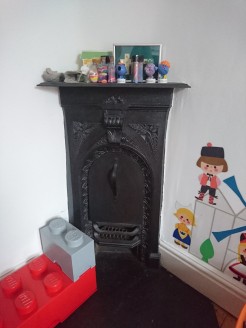 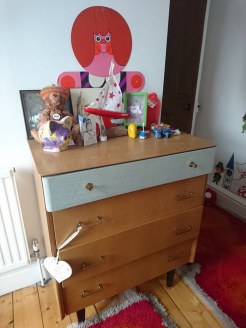 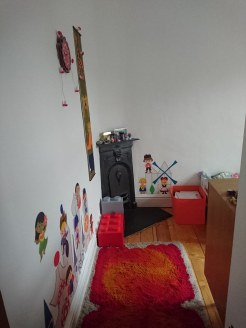 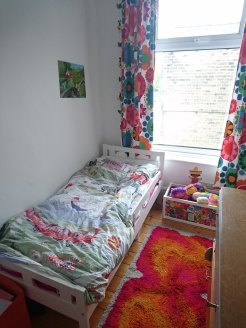 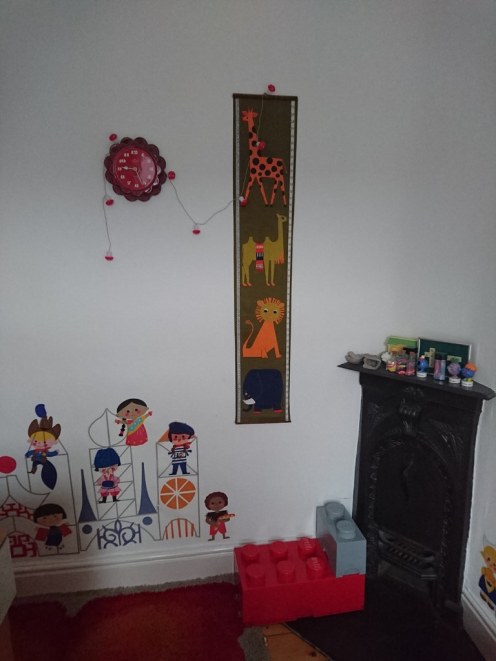 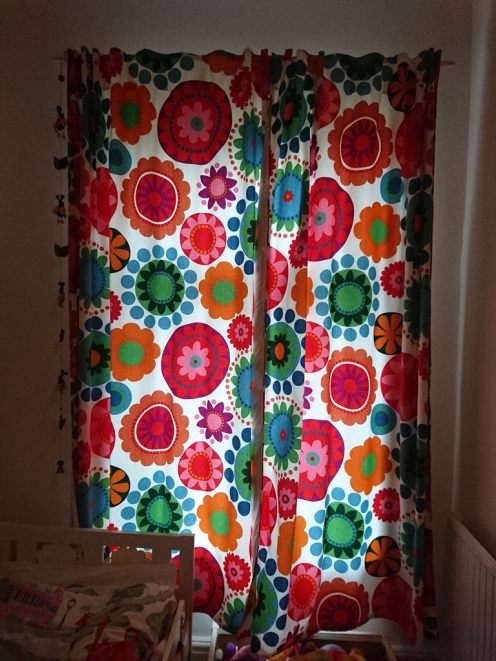 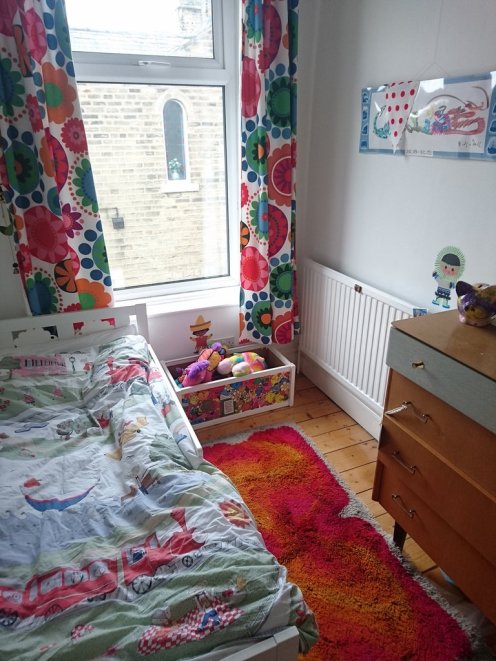