Yesterday, my friend Rachel and I decided to take a trip over to Hebden Bridge, West Yorkshire. According to the community website:

“Known as the Pennine Centre, Hebden Bridge takes its name from the packhorse bridge over Hebden Water. The town developed in late medieval times as a river-crossing and meeting point of packhorse routes from Halifax to Heptonstall, Burnley and Rochdale.

Textiles have been important in the Upper Calder Valley for centuries, but it was not until mechanisation and steam power were introduced from the late 18th century that Hebden Bridge began to grow significantly.”

Nowadays, most people probably know it as a ‘hippy’ town due to the influx of creative types from the 1960s onwards. The town certainly retains much of its alternative feel. Unfortunately for us, we chose a day to visit that culminated in a thunder storm about half an hour after we arrived:

The town has also recently been quite badly flooded (we could see why!) so many of the shops are still cleaning themselves up and getting back into order after the damage. We had a lovely lunch in a cafe on the high street (possibly called Mooch?) and then headed out into the rain. Luckily, there were enough interesting places open to have a look around, including some very expensive children’s clothing shops, some lovely galleries and one of the antiques shops.

This isn’t me, obviously, but my friend Rachel who is more than happy to pose for me when out and about. As long as she gets to pull an actual pose or wear a silly hat… more on this later. This gallery had some lovely ceramic pieces, including an artist called Julia Davey, who makes butter dishes and the like decorated with robots. Rachel bravely faced the rain to go back for one of these at the end of our visit, whilst I cowered in Faf the car. 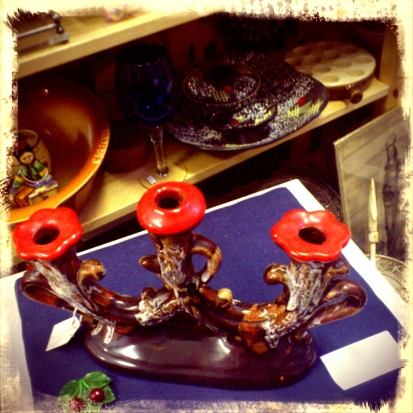 Spotted these lurking on a set of shelves, but they were a bit too pricey for me. You can see one of the brooches I bought in the foreground though: 1950s plastic cherries and leaves!

Rachel discovered hats. And that when there’s a hat, a mirror and a lady with a camera, she will quite happily pose for quite some time… 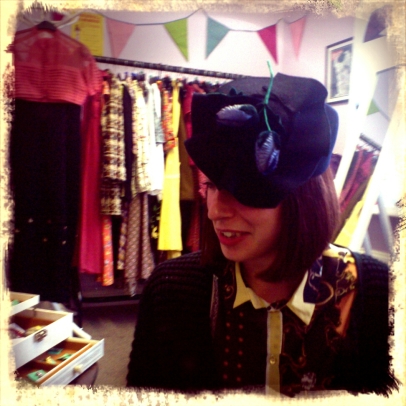 Rach bought a framed movie poster of… I can’t remember. I’ve got complete baby brain today. I can’t remember what the antiques centre was called either. Never mind. It might have been the one about a postman. It definitely had Lana Turner on it. I bought a vintage edition of ‘Woman’ magazine and an assortment of 1950s and 1960s jewellery. 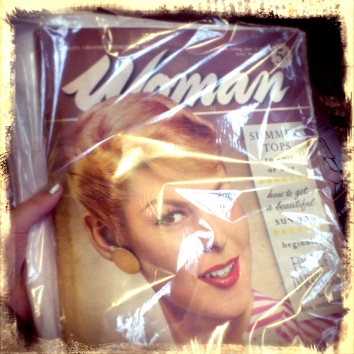 I cannot get a decent picture of the jewellery this afternoon for love nor money, but I’m planning on doing some research into them over the next few days so I’ll try again another day.

It was a shame really that we got rained off, but it coincided with our parking ticket coming to an end so we made a dash home for it before the weather and traffic could get much worse. Lovely day all in all. Our next adventure is to watch Aidan take part in the Bradley Wiggins race on Sunday. I’m hoping he can give Wiggo a good ride for his money…!