There are two questions that can be read from the title of my blog. Firstly, why create the blog at all? Well, that’s easy to answer. Something to do!  I love writing, but for many years have put off writing anything. Lack of confidence? Nothing to write about? Probably both of these and more.  Doing this seems a way of getting me back into the swing of things and allowing me a forum in which to ponder the things I am interested in.  Mostly: retro items, reading, Ebay, sewing, baking and other random past times.

So, why the title ‘A Little Lost Roe Deer’?

There is a band I love called British Sea Power.  I first started listening to these after my boyfriend insisted on taking me to see them at various festivals. After seeing them at Leeds festival a few years ago, I confess, I didn’t think much. They seemed fairly mad, playing a set that included a member of the band running through the audience wearing a motorbike helmet while banging a drum, followed by wrestling a person in a ten-foot tall bear costume.  However, familiarity breeds not-quite-contempt… I fell in love with the band, their music.

Last year, to celebrate the release of their third album, they played a tiny festival at the Tan Hill pub in Yorkshire.  It was, to say the least, an immense weekend, full of owls, potato-rolling, bands, sheep-shearing and good ol’ fashioned cider drinking.  This cemented my love of the band.  A truly triumphant showcase for their many talents, my favourite BSP song, ‘No Lucifer’ was a highlight in a whole weekend of bright spots.

Amongst many things, British Sea Power have passions for bird-watching, the afore-mentioned cider drinking, and a love of nature in all its many glorious forms.  In ‘No Lucifer’ one of the verses contains the lyrics:

“A Carlton Corsair,
A Raleigh Twenty, yeah!
A little lost roe deer,
The wind in your hair.”

Last year, my very fabulous boyfriend tracked down via Ebay an actual Raleigh Twenty Shopper bike.  This had involved him sneaking off to Kidderminster while I was at uni on a Saturday morning.  Having purchased the retro Raleigh, he then spent an hour cycling round Kidderminster on it.  I’d love to know what the local Midlanders thought of that six-foot, lanky, retro spectacle!   Anyway, lo and behold, on Christmas morning,  I received the amazing bike as my main present.  It is truly glorious. 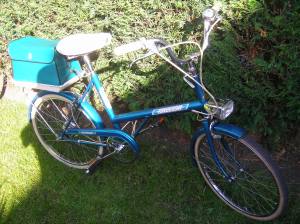 all the way from Kidderminster…

So, I’ve gone some way (a very long and round about way) of explaining the title of the blog.  In addition to inspiring the most amazing present ever, ‘No Lucifer’ also gave us the line a little lost roe deer.  We have decided that in the unfortunate event that we were to lose our jobs, or we somehow came into a lot of money, then we would love to set up our own vintage homewares shop.  The name of this shop?  ‘A Little Lost Roe Deer’.  Complete with a whole menagerie of deer-related paraphernalia with which to adorn the shop.  Perfect. I can see it already.

However, what with still having a decently paid job but not being in receipt of a vast fortune, I will make do with stealing the name for my blog until further notice. And so, to pinch another line from BSP: