I blog today as a sick woman… Unfortunately, I got sent home from work ill. However, having spent the day in bed, I feel no better and am now just getting plain bored. On a plus side, it’s allowed me to break open the Mad Men box set I ordered about a month ago. So far, I’m not hugely enamoured. I like it well enough; but the storylines are playing second fiddle to the whole look of the series at the moment.

I do love the setting and the costumes of the programme, but apart from Joan, I’m not really loving the characters yet. Also, there is the whole smoking and sexism issue. I know this is a major part of the programme, and the era for that matter, but it’s a little grating at the moment. I feel like I’ve been watching the two episodes I’ve watched so far through a haze of smoke and glass ceilings…

Cigarettes aside, Joan (played by Christina Hendricks) has the most amazing outfits! I just love her whole look, from the red hair to the tight dresses and the fact that she isn’t a size zero is fab. This is definitely a vintage look I would like to emulate, and for once, it’s something I could actually attempt to achieve.  The Mad Men website has a little tool where you can Mad Men yourself.  Here’s my attempt:

I would actually dress like this all of the time if I could! Really, there’s no reason why I couldn’t do so. I already wear the brooches, much to the amusement of my colleagues and students. I think I might even be starting a brooch revolution. Before I left this morning, one of my students walked in wearing a Hello Kitty brooch on her blazer: wrong brooch, right idea… 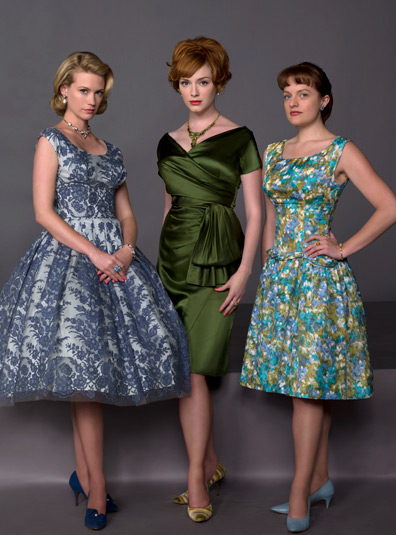 I love the green dress that Joan is wearing in this picture – I’d like that for my Christmas do this year, please.

Another retro-set television programme that I am enjoying at the moment is ‘Carnivale’.  It’s set in 1930s America, following around a carnival troupe in the Dust Bowl.  Again, costumes are gorgeous, but this series has a supernatural twist to it that has caught my attention more.  Unfortunately, I’ve been able to watch it on Youtube; furthermore, there’s only the first episode fully uploaded. So my appetite has been whetted but not satisfied with this one. I might have to give in and buy the box set for this as well. 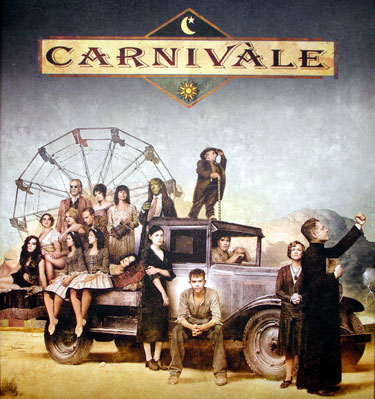 There’s a link between ‘Carnivale’ and my next TV programme that I wasn’t aware of until I researched some pictures for this post.

The link between X Files and Carnivale is this: Michael J. Anderson was a guest star on “Humbug,” a 1995 episode of “The X-Files” in which he played a hotel owner who was offended when Mulder mistook him for a carnival worker (the episode was about a town inhabited by a large number of retired or wintering carnies). In “Carnivàle” (2003), Anderson plays the head of a traveling carnival. (Taken from IMDB.com)

Quite a good link between the two, I think. The episode, Humbug, is one of Aidan’s favourites, but it genuinely gave me the creeps!  To be honest, most of the X Files episodes scare me a little bit…

X Files is a more recently set TV programme, but the only one actually produced in its decade.  It wasn’t considered retro at the time, but when you watch it now – wow – I didn’t realise how much fashion had changed since the early Nineties!

There are some truly retro moments in nearly every X Files episode, including: Scully’s reflective, round glasses; the enormous computer in the ‘Ghost in the Machine’; Mulder’s high trousers, the bouffant, unstraightened hair, politically incorrectly named episodes such as ‘Gender Bender’; the pairing of maroon and brown suits with Scully’s red hair… it’s an early Nineties’ extravaganza! 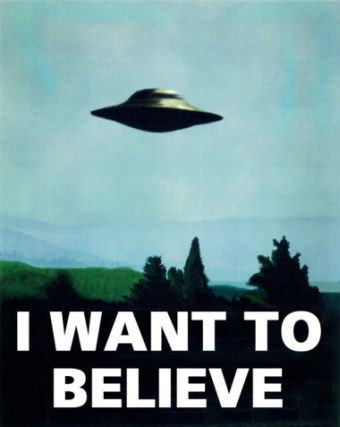 I do want to believe: that one day, I’ll look back at television being produced today and truly appreciate the vintageness of it because it is so set in its era.  It’s difficult to imagine what the defining look of the early 2000s will be.  Reality TV? Celebrity culture? Not sure.  I also want to believe that British television producers are seeing the success of shows such as ‘Carnivale’ and ‘Mad Men’ and are thinking about creating something vintage for British TV.

For now, I’ll content myself with watching my ‘Mad Men’ boxset; though hopefully I won’t be ill everytime I do so. Just had to mention it again for another picture of Joan’s dress: 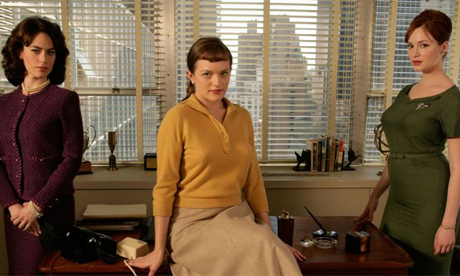