The following press release has been sent to me by Natasha, grand-daughter of Vladimir Tretchikoff. How amazing would it be to get over there and see it??

“Hi, Tretchi was my grand dad. We are having a retrospective of original works next year in the South African National Gallery. See press release below…

If you have or no of anyone with original Tretchikoff Artworks, please do let me know. Thank you!

A major retrospective of the artist Vladimir Tretchikoff, entitled Tretchikoff: The People’s Painter, will open at the IZIKO South African National Gallery in 2011. The exhibition organisers are issuing a general call for people who own original works (as opposed to prints) to be exhibited on this show. Originals paintings tend to have a textured, layered surface.

While Tretchikoff is undoubtedly one of South Africa’s most controversial artists, much maligned in the 1960s and onwards by several members of the established arts community, there can be no doubt that he has become a cultural icon and remains a favourite artist to many South Africans. Sales of his work have recently reached record levels at auction and there is a considerable revival of interest in his iconic paintings amongst designers, younger artists and critics. Despite this there has been almost no serious assessment of Tretchikoff’s art and his legacy. This exhibition aims to examine Tretchikoff anew and place him in contemporary perspective.

In his heyday Tretchikoff’s exhibitions drew record audiences at home and abroad and he pioneered the idea of selling affordable copies of his works, enabling working class people to own art which they proudly displayed above their mantelpieces. Works such as The Chinese Lady, The Dying Swan and The Lost Orchid have become a vital part of popular culture.

Readers who own original Trechikoff paintings or sketches (as opposed to prints) are encouraged to contact Andrew Lamprecht or Natasha Swift for further information:
tretchikoffexhibition@gmail.com

So, just because it’s a great excuse, here are some of my favourite Tretchikoff prints (I’ve not added ‘Balinese Girl’ despite it being one of my faves, mainly because I’ve featured it so much recently!): 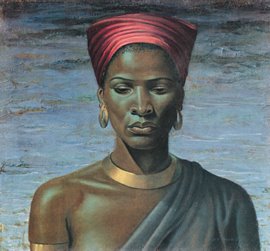 Visit the Tretchikoff website here. There are also a couple of ‘appreciation’ groups on Facebook here and here.