I really wanted to title this post, ‘A Lot On My West German Pottery Plate’ but then I realised that two of the plates I’m featuring aren’t from the country, let alone the region… ne’er mind!

This plate by Bjørn Wiinblad is part of the Rosenthal Studio Line. It’s tiny! I didn’t realise we had this but Aidan has firked it out this morning. ‘Firked’ is a verb coined by my mum which Aidan has adopted. It means to find something out. Well, this morning a few plates have been firked out for you to have a look at.

I’ve got grand plans for these plates if we ever buy a bigger house. Feature wall, somewhere prominent with a vast array of different plates adorning it… Vintage Vixen did a similar thing with her Wall of Misery; I want to make a Wall of Retro Platery.

This gorgeous piece of Italian Tourist Tattery was found by my sister Megan on a recent trip for her and my dad to Germany. It matched the lovely Italian vase I bought from Kevin Graham on our last trip, so I had to have it as soon as I saw it. It’s been featured on this blog before, but any excuse to show it again is good enough for me. These pieces were made in the 1960s in the Republic of San Marino. There are similarities to the Fat Lava of West German Pottery in the crusty, thick, white glaze around the edge; which contrasts in a stunning manner with the high-gloss smoothness of the central image.

This beautiful 1950s Ruscha wall plate depicts a market scene. Ruscha did a range of these plates and plaques which showed scenes from different streets or views. This is the only one I have, but it is a beauty. 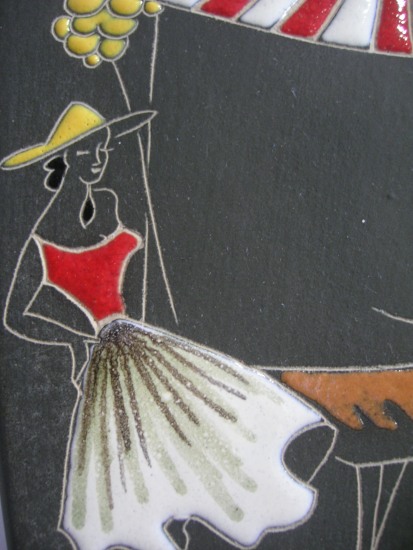 The detail and effort that goes into these pieces shows up on the smallest scale. There are at least three different  applications of glaze on her skirt.

Is it a horse? is it a deer? Is it a giraffe? Is it some strange hybrid of the three? I’m really not sure, but I do still like this little 1950s plate very much. The elongated necks and legs of these creatures, when coupled with their cheeky chirpy faces, create the cutesy kitsch feel of the 1950s. *Update* Aidan has just entered the room and mocked me considerably about this – apparently, they’re clearly giraffes. Fine then. Whatever. They’re giraffes. 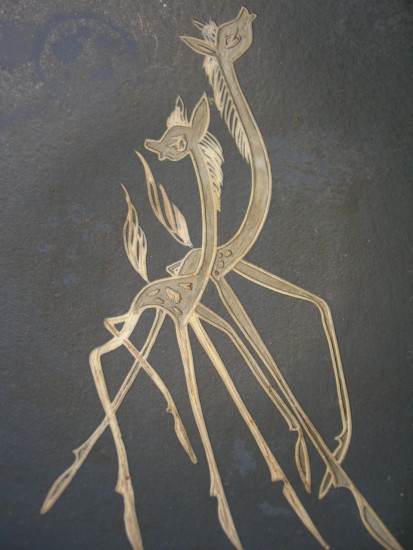 This plate is marked underneath with ‘L’Ancora Alura 208’. At first glance, I thought this was another Italian company. However, a quick Google search has discovered that it’s actually a Dutch company: Ceramics Company van den Kroonenberg. The website I found is incredibly useful and definitely worth a visit – Dutch Pottery and Ceramics marks. They say about the pottery, ‘Industrial produced Retro PopArt decorative art pottery, L’Ancora ceramics, produced by Ceramics Company van den
Kroonenberg, with black mat fragments, scratched in lines and partial covered glazes as decoration, like girls & boys heads.’ The picture they have of the backstamp also matches mine perfectly.

There are probably more plates hidden and buried in various boxes around the house, in the loft and in our friend’s garage. I think my Wall of Retro Platery is well on its way though.