Wales is quickly becoming one of my favourite places to visit, particularly North Wales. Last weekend, we booked a couple of nights in a Travelodge in Llandudno and spent the time looking round Colwyn Bay, Rhos-on-Sea and Llandudno. The trip was completely funded from clothes we’d sold on eBay, given to us by Andrea (Grandma), and we even had money to spare for extra ice creams… music to Corliss’ ears!

On Saturday, we got up at our usual time, had breakfast and set off as soon as we could. Having packed the day and night before meant we arrived at Colwyn Bay at around 10.30 to find glorious sunshine. Unfortunately, we hadn’t thought to pack any suncream, but luckily I had some face cream with an SPF in it, so we whacked that onto the kids’ faces and headed for the beach.

It was glorious. No other word for it. Really quiet, which wasn’t surprising considering the relatively early hour; the sand was lovely and clean, no sign of litter anywhere; the sea was crystal clear with a shallow edge and we spent a good couple of hours just playing here.

Aidan got the kids dressed in the morning, and for reasons known only to himself, decided Dexter was going to look super smart for a day on the beach. In fact, they both look pretty snazzy! I’m pretty sure Dexter’s outfit is smart enough to wear for a wedding (if it was ironed) so old uni friends may be seeing this one at an upcoming bash…

There’s just something about sand, sea and sunshine, isn’t there? I think because we only experience it a couple of times a year, it’s so exciting to play in. Well, for the kids it is. Over the last few years, we’ve refined a list of toys that are good to take to the beach or seaside, and don’t take up too much space in the car. Bucket and spade, that goes without saying. A ball is good, but even without a ball to kick around, our kids are really happy doing ‘beach olympics’. Basically, just seeing how fast they can run, how far they can jump past a line and following a simple obstacle course drawn into the sand. Plastic animals are good fun for building sandy homes for. Chalks are great for drawing on rocks and shells. Collecting shells – another obvious one – and making patterns with them. Having said all that, all I ever want to do at the beach is lie down and read, enjoying the sunshine and calming atmosphere. Luckily, Aidan can’t sit still for more than a few moments so is always happy to chase the kids round for hours. I mean, not literally chase them round; it’s not like an Alice in Wonderland style caucus (spelling?) race. 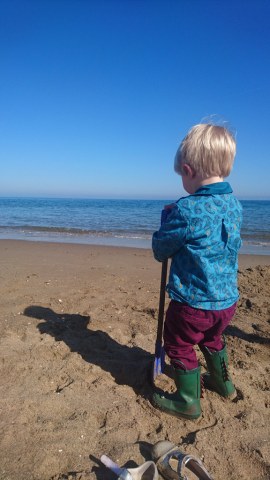 After we’d spent a couple of hours baking on the sand at Colwyn Bay, we headed into the town to have a look round the charity shops. Obviously. This little family doesn’t go anywhere without a look round the chazzers. We got loads. I might even do a separate chazzer finds post, although not everything was particularly retro, I did get a few interesting bits and bobs. Most of it will be going on eBay (to fund the next holiday and outings for this year) but I did find some more vintage Enid Blyton books to add to my shelf of retro books (which hasn’t actually gone up anywhere yet, but it does exist. In my head.) 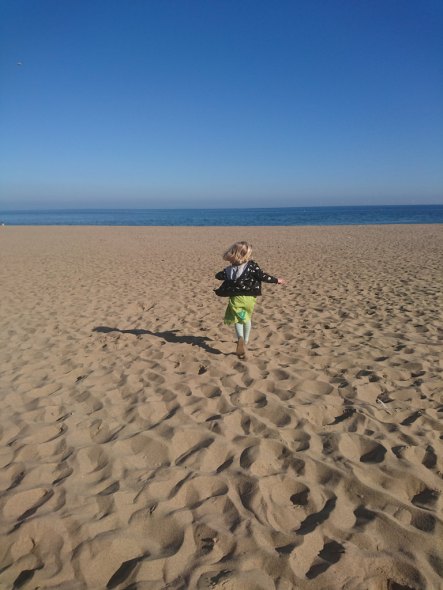 Ten minutes up the road from Colwyn Bay is Rhos-on-Sea. It always feels a little bit upmarket here. There are fewer charity shops, more cafes and a few swish looking shops. To be honest, we always enjoy looking round both of these places. I’d got it in my head that Colwyn Bay was a bit rough, but I don’t know where this impression has come from because it is lovely. We think we could spend a whole week in this area, using the town as a base. Anyway, Rhos-on-Sea was just as lovely as we remembered it.

We ate some delicious ice creams, had another play on the beach here and made the most of the last bit of sunshine from the day.

After this, we headed to Llandudno to find our Travelodge and something to eat. After wandering around a bit and an ill-fated sit-down in a restaurant where it became apparent that the kids were too tired to make it through a meal, we ended up eating takeaway pizza in our room, watching a film. The kids chose Alice in Wonderland to watch, and it wasn’t until the next day that I remembered that Lewis Carroll comes from the town. So, it worked out quite well that we’d watched it and could spy all of the characters in statue form around the streets nearby.

Trying to get to sleep that night was… interesting. Corliss usually just rolls over and goes straight to sleep (like her dad), whereas Dexter takes ages to nod off (like me) and this involves lots of singing, chatting away, rolling around his bed, poking us all in the face… well, Saturday night was no exception. Once he did finally go to sleep (and Aidan had also gone to sleep in the meantime), Dexter then spent most of the night grinding his teeth like a little miniature toucan. I’m not joking. I could not get to sleep. He’d stop for a bit; I’d start to drift off…. clack clack clack clack clack clack.  I tried poking him, getting him to roll over – luckily, once he is asleep, he’s almost impossible to wake up – I even tried putting my finger in his mouth to move his jaw or something. That didn’t work. I didn’t sleep much Saturday night thanks to Toucan boy.

After a bleary start for me and breakfast on the beach for Aidan and the kids, we set off for Conwy and Conway Castle.

Conway Castle is amazing. It’s breath-taking. Quite literally, in my case. I really struggled to breathe at the very tops of the towers. I’m not great with heights anyway, and with the munchkins up there too… well, I’m afraid I chickened out of going up most of them and left the adventuring to Aidan and the kids. He’d made them a map of the castle, some ‘coins’ and set them off on a treasure hunt round it. We were hiding these coins in various places for them, trying to be fairly surreptitious about it but we did get one woman asking excitedly about the treasure hunt – we had to explain that we’d just done it ourselves. The kids were thrilled with this though, even more so when their prize of a little knight was revealed at the end. Aidan hid the toy knights in the ‘Kitchen Tower’ where Corliss found a dead pigeon earlier on in the day. She led Aidan and Dexter over to see it with a, ‘Look what I’ve found…. a dead pigeon!’ and a triumphant flourish. Not sure what was so fascinating about it…!

The castle itself is wonderful to look round. Much of it is still intact enough to walk upstairs, up and down the towers and around the edge of the walls. I loved seeing all of the rooms laid out before us and the views from the top are spectacular if you make it up to look. 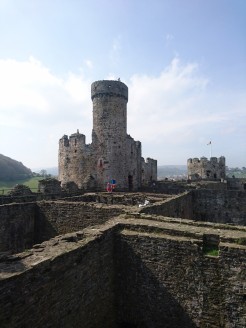 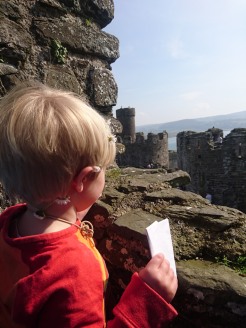 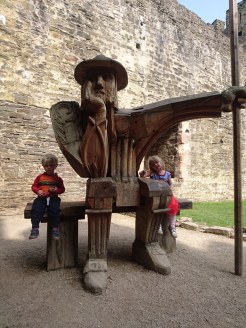 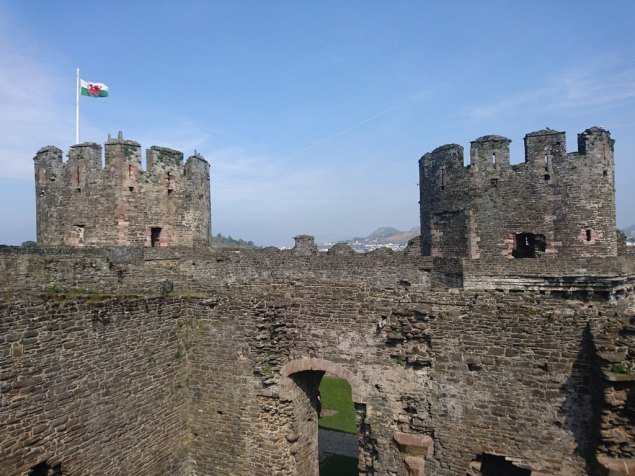 We must have spent about three hours here, and yet the time seemed to fly. Corliss and Dexter were shattered after looking round here so we headed into Conwy town itself to get an ice cream and somewhere to sit down. Unluckily for him, Dexter fell asleep in Aidan’s arms and missed out on his ice cream! This became a theme of the weekend and he missed out another one, even better one, the next day. We sat down on the quayside while Corliss ate her ice-cream, and she quizzed us about the people queuing up to get into a tiny red house behind us. It is the Smallest House in Great Britain and despite visiting Conwy several times, we’ve never actually been into it. This time, Corliss and I went inside while Aidan sat with the snoozing Toucan boy. We waited longer in the queue to get in than we spent inside!

It seems obvious to say it, but it really is tiny! Only £1.50 for the two of us to look round. Corliss found it fascinating. She asked the volunteer outside lots of questions before we went in and was really interested in the story of the 6 foot fisherman who used to live in it. Worth the wait in the queue to have a marvel at how small it is, in my opinion. The lady outside was clearly bemused with Corliss and her pose for me! Read more about it here.

On the way back from Conwy, we stopped at the West Shore of Llandudno to sail our boats in the boating pond there. It’s huge! Actually, to be fair, it is more of a lake than a pond. We had to split up on each side of the pond because it was too big to keep running round. I couldn’t get a decent picture of it as by this point the weather had turned quite cold and cloudy. Plus my plantar faschiitis (or footy footy-itis) as Aidan refers to it was really sore so I wasn’t in the mood for gallivanting round by this point. Didn’t stop the kids though, obviously, and we spent an hour or so here before the wind was too cold for us to stay any longer. Then the kids and I rode back to main Llandudno on the road train, following Aidan in the Roomster!

By Monday, we were all feeling a bit tired thanks to some late nights and early mornings. We had a wander round the charity shops, but either our hearts weren’t really in it or it was just dross in them as we found nothing other than a top and skirt for Corliss. She chose them herself and was very proud! We did find more of the Alice in Wonderland statues which were fun to see.

Dexter was fascinated by the Red Queen statue, which was just over the road from our Travelodge. After a picnic lunch by the White Rabbit statue, we went to the sea front for a very cold and windy play with the stones. We’d forgotten to bring chalks with us, but it turns out stones will work just as well.

We spent ages drawing pictures, writing letters and playing noughts and crosses on the stones there. 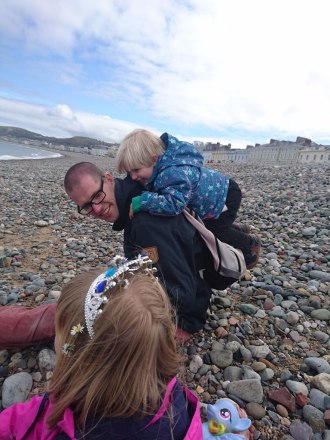 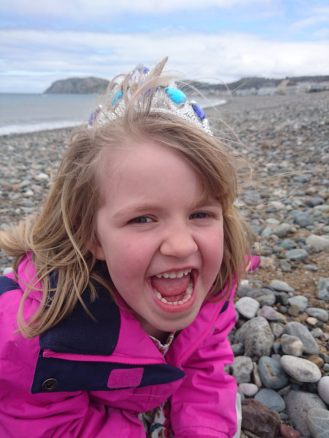 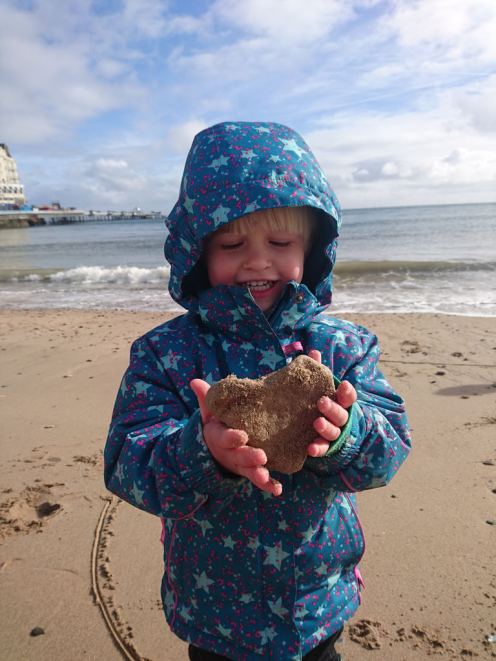 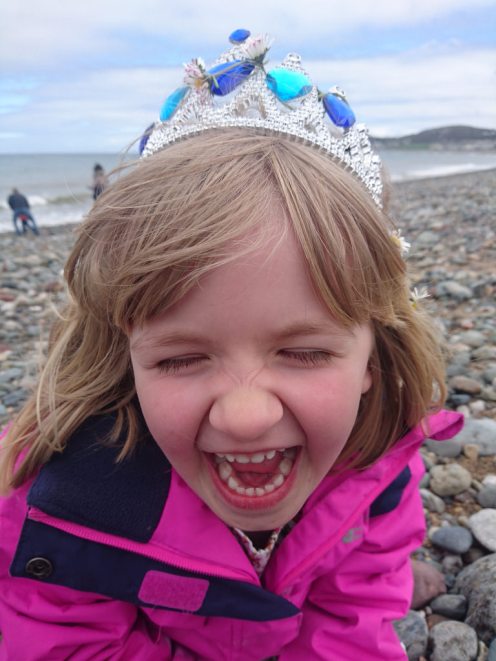 Corliss wore her crown all day long… Dexter found a heart shaped rock on the beach, all by himself, that he was so proud of. He kept saying to us, ‘it’s a heart!’ like he couldn’t quite believe what he’d found. However, as we left to find a particularly yummy looking ice cream parlour, once again, Dexter went to sleep. Missing out on some amazing ice cream delights in doing so. Seriously, I would highly recommend the Alice in Wonderland themed ice cream parlour . We had waffles with just one scoop of ice cream, brownies, nuts and sauce. It was delicious. Everything tasted freshly made and every single calorie was worth it.

Our day was finished off with a trip back to the boating pond before getting some lovely fish and chips and sitting looking at the beach on the West Shore. We headed home with our tummies full, feeling refreshed and happy after our mini-holiday away.