Thursday saw the first visit to the auction house in Holmfirth since before Christmas. In all honesty, it was a bit thin on the ground for retro and vintage items. We did put a few bids in on boxes that contained the odd bits and bobs for us, then junk for a car boot sale.  One such box contained this:

I quite fancied this as a ‘party’ dish. Aidan wasn’t so keen, so I put a bid on the box. Bit disappointed not to have won it, but clearly someone was willing to pay more than the £7 I put on the box! (Such a cheapskate…)

Other things that caught my eye were these: 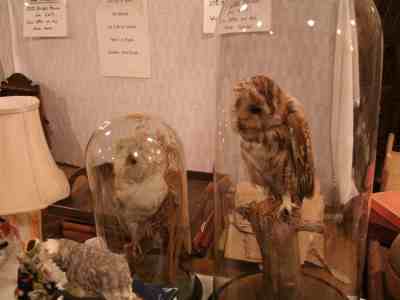 Now, don’t get me wrong, I would not want these in my own house. But, there does seem to be a current trend for taxidermy in vintage styling. How many times have you seen faux (and real) stag’s heads and antlers in interiors photos?

We have won one box, but it’s only full of some retro kitchen ware. I’ll upload pictures later. Right now, I need to leave for a friend’s birthday afternoon tea. Plus, I’ve just realised that it’s that cold in my spare room that I can see my breath!