Within the next few posts, there should be a guest appearance from Aidan! He wants to do a post on the architecture of Morecambe; I’m trying to convince him to set up his own blog, so perhaps if he enjoys writing a guest one on mine, he might get his own going.

In the meantime, I’d like to show you some of the fabulous finds we came across in Morecambe. I’m sure Aidan will explain more, but in a nutshell: we went to Morecambe on Thursday for Aidan’s birthday and stayed over at the Midland hotel.  The usual wandering around the town ensued and we found that Morecambe appears to be a bit of a retro Mecca.

We found two – yes, two! – pretty good antiques centres. If I’m whizzy enough, I’ll try and put their locations in a map on here. Until then, have a look at some of the retroness we found.

Firstly, we found quite a few charity shops and one small antiques shop in Morecambe itself. I bought these:

I bought these for £10 for the two from a slightly mad dealer in a little, very (illegally) smoky shop. I think we both needed a bit of fresh air after being in there! But a good scrub later and these two stands are lovely. Not sure where they’re going to live in our tiny, two-up-two-down terrace, but they’ll squeeze in somewhere. We only got back yesterday at half six and within an hour I’d made a cake to go on top of the Shelley one… that’s dedication!

In Morecambe itself, there is a very, very loooong promenade that reaches for miles!  We found Morecambe Antiques Centre and from the outside, we both thought, “Hmmm, interesting.”  We really weren’t sure about going in; I’m so glad we did!  One of the dealers was selling quite a few West German Pots.  I bought two more of my Scheurich 414 pots (the one on the right and the yellow and brown one at the back in the opening picture).  Aidan also bought this:

We guessed it was German and took a bit of a chance on it, really. Turns out it’s actually East German – thanks to the lovely people at the Pottery and Glass forum, we were able to find out a bit more about it. 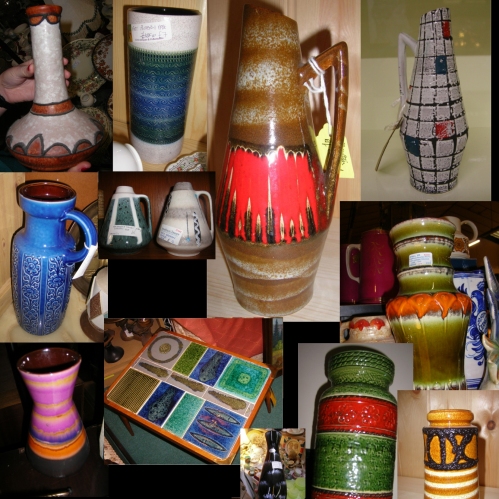 These are some of the pots we spotted at GB Antiques in Lancaster. We went there on Friday, on our way back from Morecambe.  There were that many different pots dotted about that I had far too many photos to post! Hence the giant montage.  There was one particularly good stall, which contained a few interesting pots: 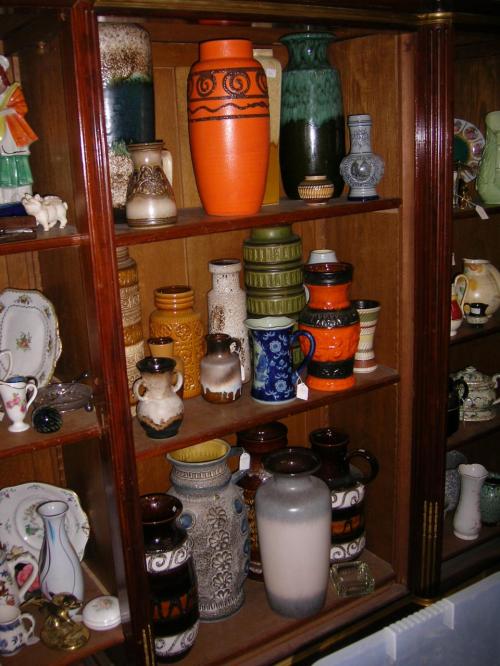 I bought yet another 414 and the bright orange pot:

All in all, a very successful two days’ hunting… Oh, and a pretty fabulous stay in an Art Deco hotel. But you’ll just have to wait til Aidan has mastered the art of blogging for pictures and details of that one. Until then, here’s a picture of me and the only famous person to ever come from Morecambe: 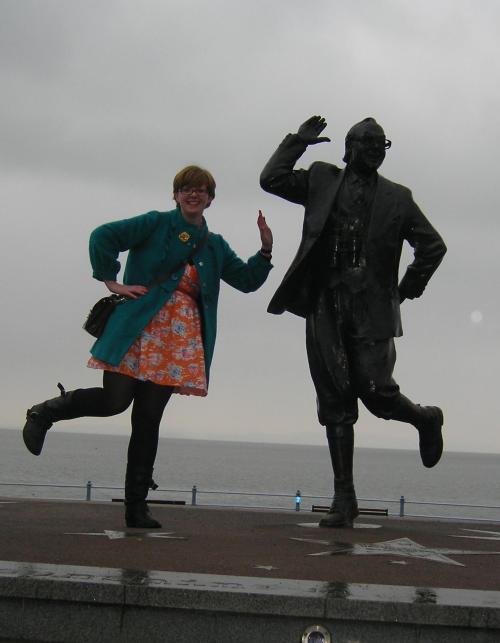