I tend to like the Dumler & Breiden, Carstens and Scheurich pieces of West German Pottery in any batch that we bring back from Germany and I often gravitate towards posting pictures of them. For once, I thought I’d share some from factories that many people rate highly; yet, I often ignore. First up is Ruscha.

Ruscha was founded in 1948 by Rudolph Schardt, the name comprising of the first few letters of his name. The factory closed in 1996. After this, Scheurich bought the designs and the name and still produces limited runs of items under the Ruscha Art name.

Cilli Wörsdörfer ran the art potter section in the early 1950s and produced famous designs such as Zebra and Milano. The most influential move forward in glaze was made by Otto Gerharz, the production director from 1951 – devising the vulcano glaze which marked a move towards dripped glazes.

Kurt Tschörner created most of the shapes, including the famous 313 (which was released in 1954):

All information collated by Aidan from various magnificent sources including:

Ruscha items are almost always in white clay. There are rare examples of brown/red clay but this would only be when sources ran out and alternatives were sourced rather than go out of production. Marks are a mixture of incised and embossed. Unlike other WGP where the form number indicates the height of the piece, Ruscha’s different forms had different sized version indicated by a single number.

Items are never marked Germany or West Germany. Many just have the form number and no size notation. Some series were labelled with a letter prior to the form number such as R, G, B, H, L, K and S. It may be that there was a complete A-Z of these which have not been discovered.

Usually one number was reserved for one form and re-use of form numbers was not used to the extent of Scheurich and Bay. Sometimes, however, numbers were re-used after a number of years. In the picture above, the Ruscha 304 was one such reuse.

On this one, you can just about see the form number with its ‘1’ indicating that it would have been the smallest size in this form:

People seem to love Ruscha pieces. They do seem to be of better quality than other factories, more subdued in colour so perhaps can be considered more ‘stylish’ as a result of that. I must admit, I don’t get that excited by the vast majority of Ruscha pots. I do like the red and black one above, but I’m not massively overwhelmed by them. The 313, for example, does not send me into a mouth-frothing tizzy at the sight of it. Well, no pot does really, but you get the point.

Having said that, I do like that green one.

All new pots courtesy of the February Road Trip. That only leaves about 230 to get through… Aidan spent all of yesterday morning photographing and cataloguing all of them so massive thanks for those pictures! They’re better than my usual efforts, that’s for sure.

That one’s a beast: we didn’t even realise it was Ruscha at first. Aidan managed to ID it using old Ruscha catalogue pages that somebody posted on the Pottery and Glass forum. 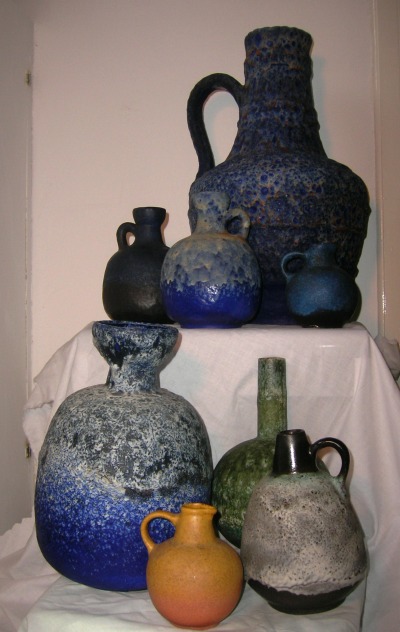 So, Ruscha: Love or loathe them? Like them or leave them?