Last weekend, we had a look around the charity shops of Ashton-Under-Lyne. It’s one of our favourite towns for chazzer hunting as not only does it have lots of charity shops to look round but it also has a couple of fantastic veggie cafes to visit: the incomparable Lily’s Vegetarian Indian Cafe and a new one (to us) called Topaz which is run by MIND. We’ve still not managed to eat at Topaz; when we popped in on Saturday all of the tables were full and there was a wait time of 20 minutes. The tiny tots could not wait that long unfortunately. And I do mean ‘unfortunately’ because the food that was being brought out looked amazing. We’ll go back and try it out soon, I’m sure.

As per usual, we came back laden down with all sorts of random stuff. We’re trying really hard at the moment to sell lots on eBay to fund this year’s holiday. Last year, we went to Croatia with the proceeds of our eBay sales; this year we’re seriously thinking about a road trip round Iceland. People on the tiny island we stayed on in Croatia thought we were crackers for doing the trip with a (then) seven month old and two year old… no doubt a road trip with the pair of them will cause more raised eyebrows. But anyway, it’s to be firmly decided yet. In the meantime, we keep racking up the sales, sorting out the loot and trying to spot the gems amongst the dross.

This is one of my favourite things we found last week:

It’s a 1985 Big Ladybird Picture word book. Compiled by Lynne J Bradbury and illustrated by Lynn N. Grundy. A quick Google search brings up some images tagged with Grundy’s name, and that distinctive style just jumps out! It’s like my childhood on the page: I distinctly remember that orange and yellow striped cat. However, I can’t seem to find any information about the illustrator herself; just a few lists of books accredited to her. Hmmm… this might be a little puzzle to work out.

I’ve got a vague idea at the moment of creating a few prints for the kids’ bedrooms using some of our retro and vintage books. We’ve got a fair few building up now, that I’m trying very hard to keep out of grubby hands until I’ve managed to photocopy the pages that I want. Unlike many other crafty/mumsy types, I’m pretty shit at actually getting these ideas manifested. I’ve even bought some picture frames for another project – bought them over a month ago and still haven’t put the pictures together. Plan for the weekend perhaps? Anyway, I’m digressing… The Picture Word Book. Back to that and it’s fabulous pictures.

I really think some of these would look brilliant as prints up on the wall. In my head, there should be loads of them in different kinds of coloured frames. Not all from this book, obviously, but there are plenty to choose from that would look ace. I think the ‘Story Words’ page is my favourite as I just love anything with toadstools, magical creatures and gnomes. The dragon is probably the cutest dragon ever – I’d like a print just of that actually. For my own bedroom, never mind the kids. 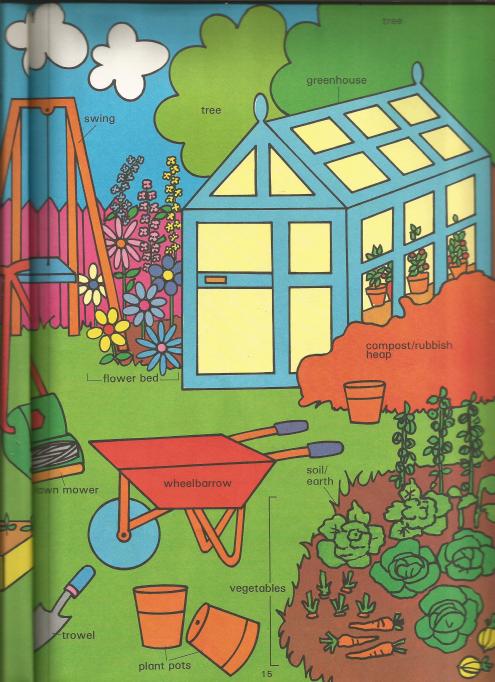 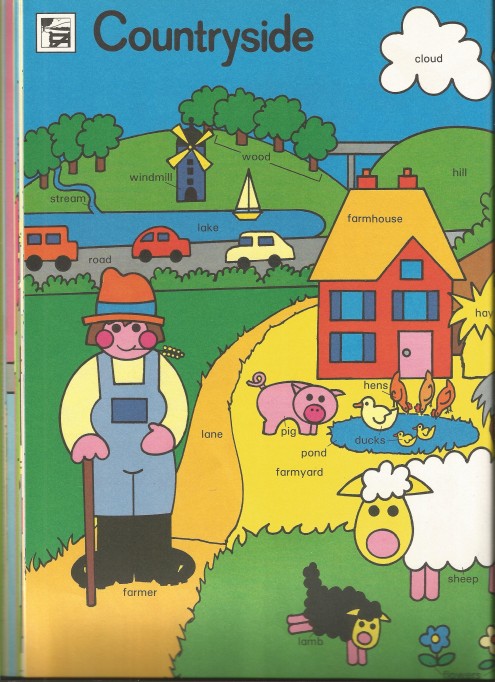 These two seemed particularly apt for this time of year. The sun is shining today, it seems warmer and brighter than it has done for ages. Even last week’s snow seems a long time ago now. Corliss is giving me a daily update on the state of the snow. Today’s assessment of ‘It’s allllll gone now!’ did make me feel very cheerful. Don’t get me wrong, I love a bit of snow, but have you ever tried to actually do anything with small children when it’s snowing? It’s horrendous, time-consuming and stressful. Well, it is for me. I fully admit I could be in the minority opinion on that one! I much prefer the springtime, summer, autumn: basically, any time of the year as long as the sun is shining, even just a little bit. 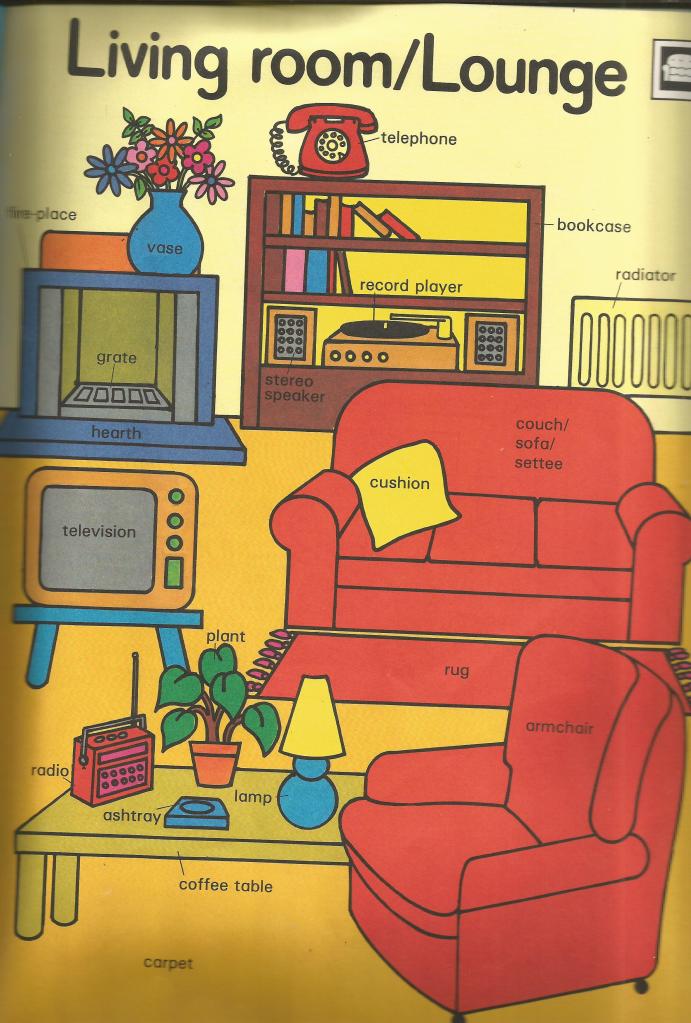 This is basically our living room. Fireplace, record player, lots of stuff piled on any available surface. Just add a few more toys in, random bits of paper, West German pottery and voila. Just minus the ashtray. Obviously that was essential in 1985. 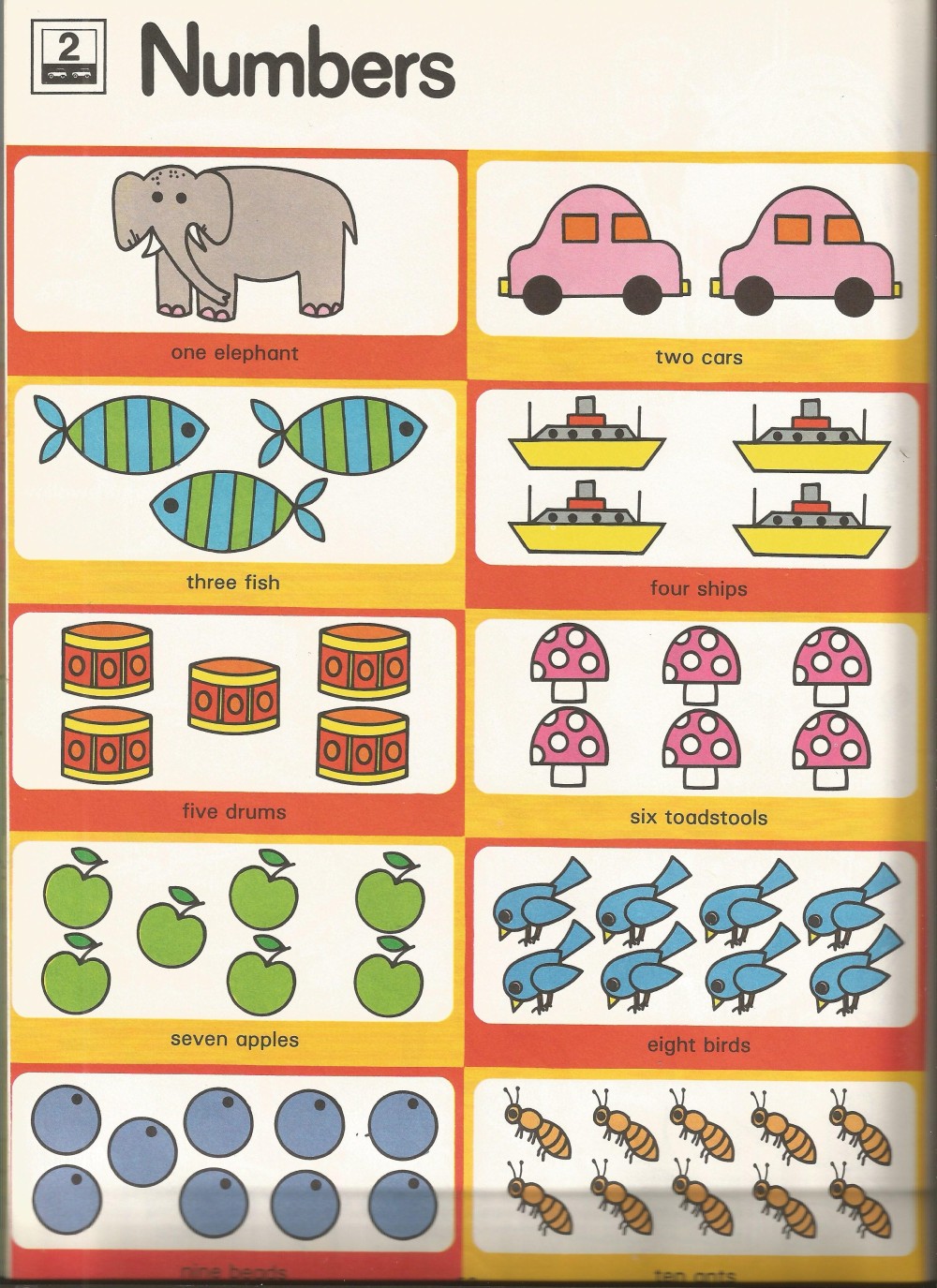 Apologies for the blurriness of the bottom of that one; I couldn’t get it to scan in focus as the book is ever so slightly too big for my scanner. That picture is mainly for the toadstools… Those are meant to be beads bottom left, but they look like blueberries. Another page I think could work well in a kids room.

My kids are obsessed with anything transport related at the moment. I think my aim of today should be to get them to say ‘fuselage’. Considering Dexter can’t yet manage ‘Mummy’, you’d think it would be a tricky task but the kid has managed to say ‘Corliss’ ‘teddy’ and ‘double’ (pronounced doo-blay in our household. It’s what we call it when Daddy carries them both around at once; a ‘doo-blay’ or a ‘double-pick-up. Dexter held his arms up to Aidan this morning and said, ‘doo-blay doo-blay’.As a further aside, he’s also managed to do a forward roll this week, albeit unintentional. The lad’s a secret genius, I tell you.) so perhaps ‘fuselage’ is a goer.

There are tons more pictures in the book but I’m going to save some for another post. I’ve spent so long fannying around with the scanner this afternoon while Dexter is snoozing (Corliss is now at pre-school) that I’ve done nothing else. Need to get some washing on the line while the sun is out and get some more in. No-one warned me about the washing before we had kids… oh my word, it is NEVER ENDING. I think it should be on some kind of leaflet they give to you once you get pregnant: ‘Forget All the Baby Prep and Get Prepared for the Washing’. When people used to say to me they’d spent an hour at the weekend doing their laundry, I used to think – this is pre-baby and about people with kids obviously – I used to think, ‘What the effing jeff are you doing all that time?’ Nowadays, if I could only spend an hour a week on laundry I’d be flipping cartwheeling with joy down the street. If I could do cartwheels, that is.