A few weeks ago, I was teaching a lesson on poverty in the Victorian era (for context to ‘Great Expectations’) and I said to the class,  “Imagine what it would be like to visit a place where you genuinely felt horrified that people lived in such a state.”  A little voice from the front asked, “Like Blackpool?”

Blackpool has this image of run-down, faded glamour amidst swarthes of chavs and hen parties. Now, I’m not saying that there isn’t an element of truth to this. However, part of this is what holds the charm of Blackpool for me.  Beneath the dilapidated amusements arcades and boarded out shop fronts, there are some gems to be found in Blackpool.

Aidan and I love a little look round on a Saturday: circling the charity shops like seagulls, searching for treasures to pluck from the shelves; wandering through the amusements, feeding two pences into the penny falls machines’ gasping mouths; before purchasing fish (for me) and chips to quickly scoff on the beach, using purple fingers to eat rapidly, eyes streaming in the wind. Saturday 13th February was such a day and what a magnificent day it was.

It seems to have been some time since we were last there and there are changes about.  Above is part of the regeneration of the centre. It is a beautifully tactile sculpture, comprising of the silver wave with diving person stretching into the sky, and miniature sea-green icebergs dotted around it. Even as we looked at it and took photos, many other people were wandering over to look at themselves stretched in the funhouse style mirrow of the sculpture; children balancing themselves treacherously atop the icebergs. 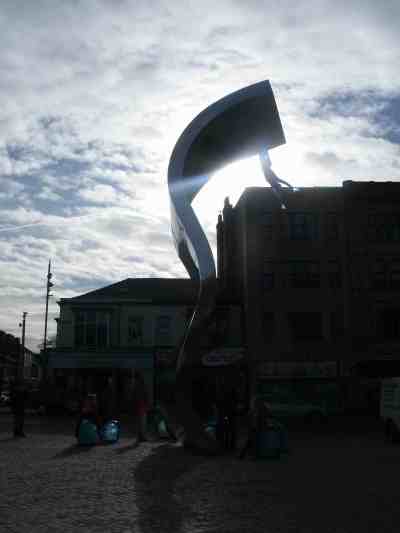 Across the newly laid cobbles lies a beautiful church: 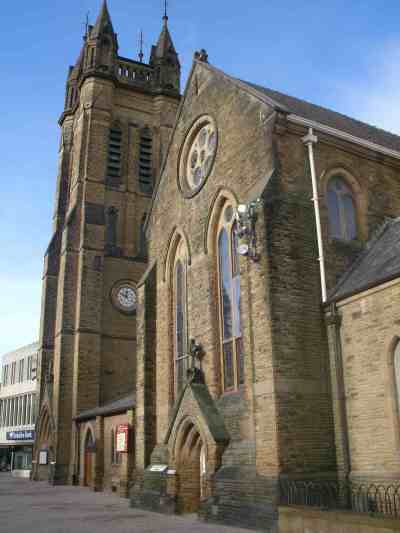 It wasn’t open for us to have a look inside, but the effect of the whole square was beautiful.  It seems to be starting to encourage a growth of new shops, cafes and restaurants around it – surely a welcome contrast to some of the more rundown areas.

As well as the new, there are some amazing examples of the old: fifties and sixties designed buildings are strewn around Blackpool. Actually, not so much strewn as crammed – every single street seems to force together different eras. We spotted this tiled wall next to a shop selling cushions featuring dog motifs:

How unbelievably 1950s is that?! I would love to have those tiles in a bathroom or a kitchen.  These were covering an entire unit, with only a door breaking up the tiles. Why on earth they were used is a mystery… But really, how fantastic do they look?

And these weren’t the only bit of fabulous Fifties-ness that we spotted: 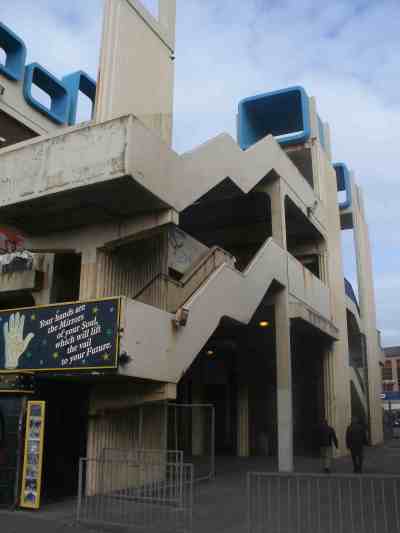 This is the stairwell to the side of a shopping centre. Note the misspelling on the sign for the fortune teller:

Inside the market, Aidan spotted these: 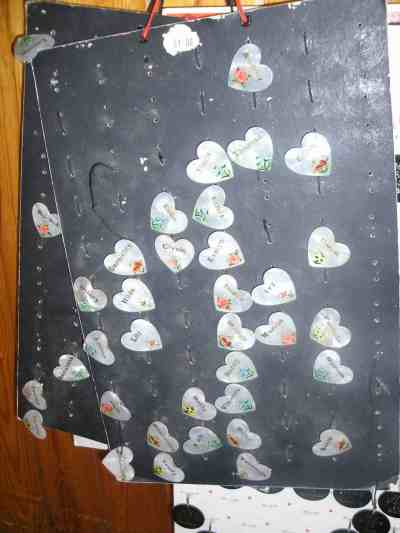 I am now the proud owner of a Fifties’ plastic heart-shaped brooch that says ‘Betty’. I would probably have liked the whole tray!  The front sheet had names such as, ‘Vivienne’, ‘Audrey’, ‘Rose’, ‘Glynis’ and ‘Elsie’; while the sheet behind it had, ‘Joanne’, ‘Tracey’, ‘Valerie’ and ‘Sharon’.  Seemingly, each sheet was for a different decade of names.

As I’ve already mentioned, you cannot go to Blackpool without eating a portion of fish and chips on the beach.  Unfortunately, the shop this wall is attached to no longer sells the traditional seaside food: 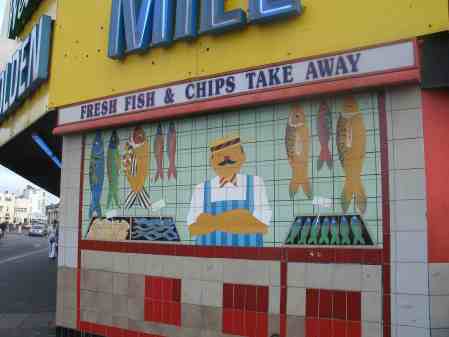 We wandered further inland to find our fish and chips, but then headed back to the beach to wolf them down. After successfully finishing them without being attacked by the watching seagulls (or losing fingers to frost bite), we went for an extremely quick wander down to the seashore and back. This time of year, it is extremely quiet and makes for some beautiful shots of the area.

One shot of it had to be taken, really:

Opened to the public in 1894, Blackpool Tower was built in response to the Eiffel Tower after the mayor of Blackpool, John Bickerstaffe, visited the Parisian monument and was so impressed that he encouraged a group of local businessmen to finance Blackpool’s very own version.  Nowadays, it hosts a number of ‘family-friendly’ attractions such as ‘Jungle Jim’s Towering Adventureland’. Not my cup of tea, but I like the idea of the North West having its own miniature Eiffel Tower.

At the end of the day, we had thirty minutes to waste while we waited for our train to whisk us back to Manchester and Glossop.  On a previous visit to Blackpool with my friend Claire, we’d found a lovely little cupcake cafe. However, on subsequent visits with Aidan, we’d never managed to find it. This time we were successful! And thoroughly enjoyed our cupcakes and hot chocolate: 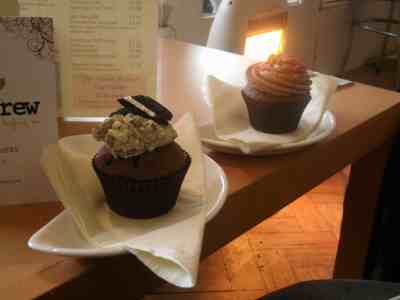 So there you have it: the hidden beauty of Blackpool. I’m beginning to think that everywhere has a certain charm to it… if you just know where to look.