This was one of our favourite finds from the last German Road Trip. It was in one of the few vintage shops we found over there – very similar to Pop Boutique but an odd mixture of really cool stuff that was quite inexpensive, but then rubbish, really REALLY expensive things. Bizarre. Anyway, this was a bargain; we have a feeling we were undercharged…

Actually, the oddest feature of this particular pot shows up well on that picture: a previous owner has painted over the black underglaze. It’s not that noticeable in real life and still looks amazing. Consideration has gone in to trying to remove it, but there’s always the danger of knocking or ruining the glaze that’s there.

I’m getting the autumnal feeling now. Parents came over for a couple of days and we went to see Manic Street Preachers and British Sea Power. They brought with them some mini Jack O’Lantern pumpkins. Here’s how I’m storing them: 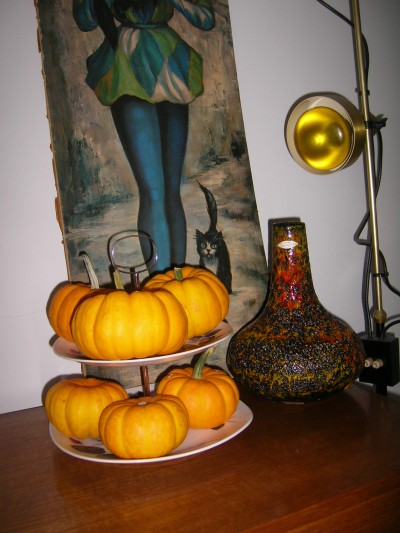 I’ve seen a fantastic Halloween display in this month’s edition of Marie Claire magazine which I’m intending on trying to emulate. I’ve also seen a display with half opened conkers which I like the look of as well. Lots of ideas: need to get some of them implemented.