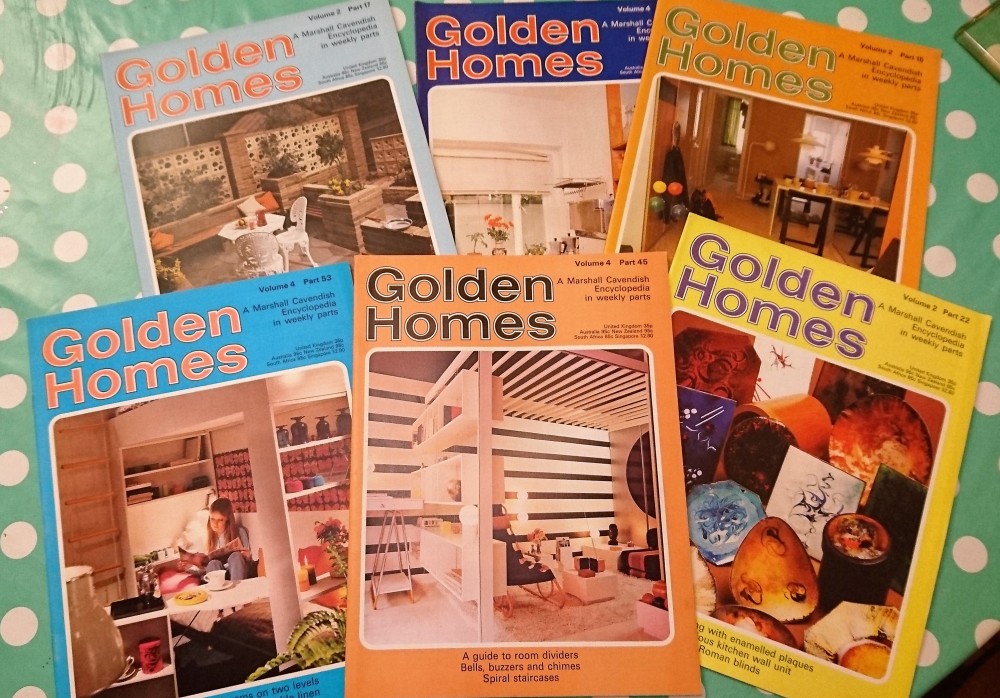 Golden Homes was a DIY magazine published in the 1970s featuring articles on how to do relatively easy stuff; things like tiling the roof of your house, building extensions and constructing your own spiral staircase. I mean, anyone can do that, right? With the proper tools of course… I spotted a stash of these in a charity shop a few weeks ago. A quick flick through and I’d spotted a few interesting look pieces of pottery, glass and some amazing looking retro decor. 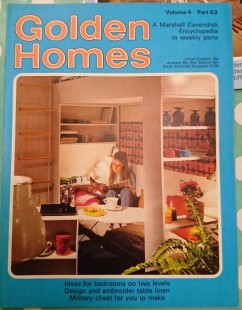 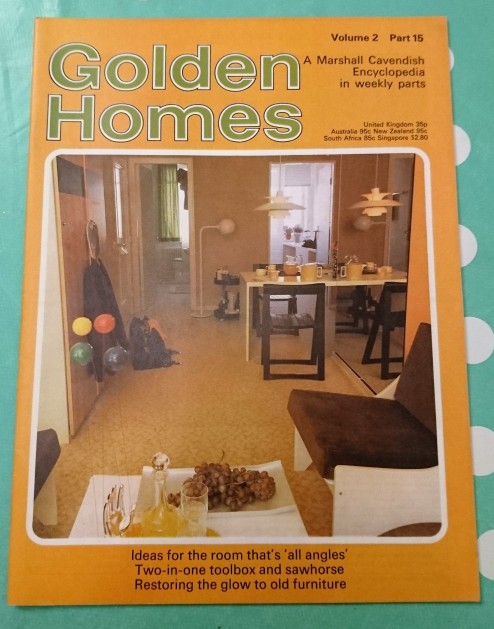 We’re actually looking to decorate a couple of rooms by the end of this year: the kitchen and Corliss’s new bedroom (if I ever manage to drag Aidan along to actually look at some kitchens.) We’re planning to move Corliss into a new room as a birthday present; she needs a bigger room and it makes sense to let her have the spare room for a proper bedroom. There are some brilliant bits of 70s decor in the magazines. Some that I wouldn’t dream of using, but there are definitely some I would love to recreate. 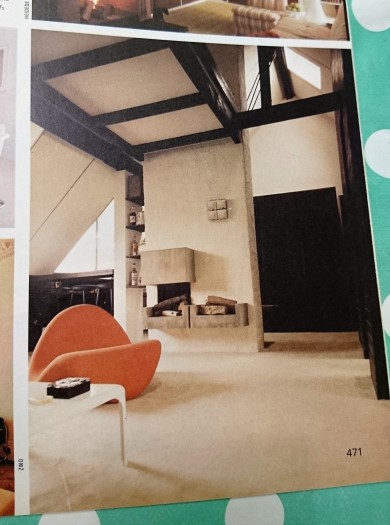 These are my favourite kids rooms that are featured: 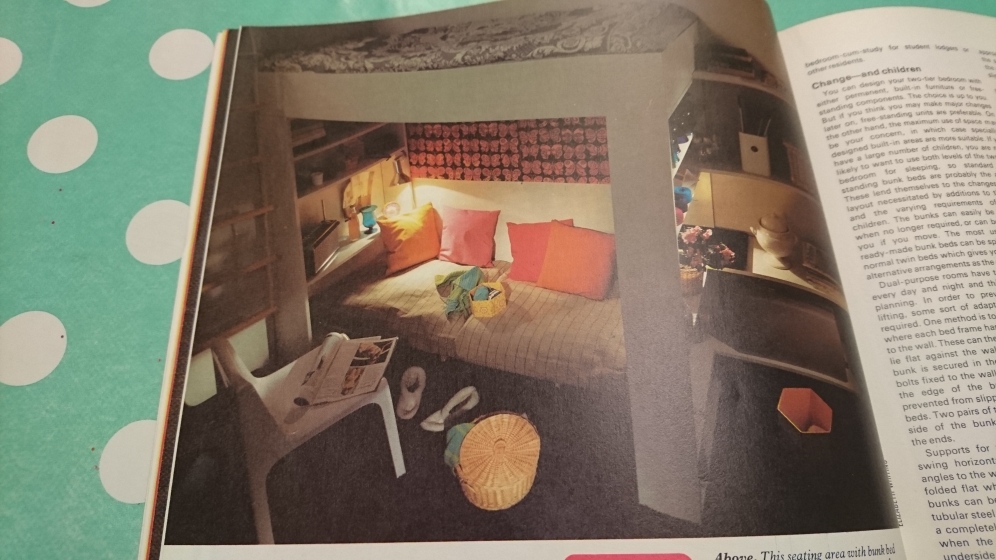 Although, I’m not sure I’d trust anyone to sleep on that top bunk without falling off! This one is my absolute favourite:

I would genuinely love to recreate this in Corliss’ new room. The tree idea around a cabin bed is something I’ve thought about already after seeing something like it on that BBC programme about designing rooms. Not Changing Rooms, The Great Interior Design Challenge.

And I’m not sure what that one is supposed to be, exactly. Is it a playroom for kids? One for adults that they’ve let the kids trash. We’ve all been ill this week, so we have created our own version of this picture…

Clearly a case of cabin fever after a week of illness if ever I saw one. Not quite so stylish looking in real, non-staged life, is it?

There aren’t as many good-looking kitchens in the magazines as I would have hoped. From some very (and I do mean very) extensive researching, I think my love for retro decor doesn’t actually extend to kitchens. I’d almost love to create something that was really now, 2016 so that in fifty years’ time, someone else can look at pictures of it and think, “Wow, that looks so stylish and so 2016!” And then I remember that if we do the kitchen up, we probably will never do it again so we need something we can live with past 2016.

Having said that, I think these next two ideas wouldn’t look out of place in a glossy magazine published now. I love that deep purple colour and I’m tempted by something of that colour combo in our kitchen, maybe with grey. Although, is grey going to be one of those things we look back on and shudder? 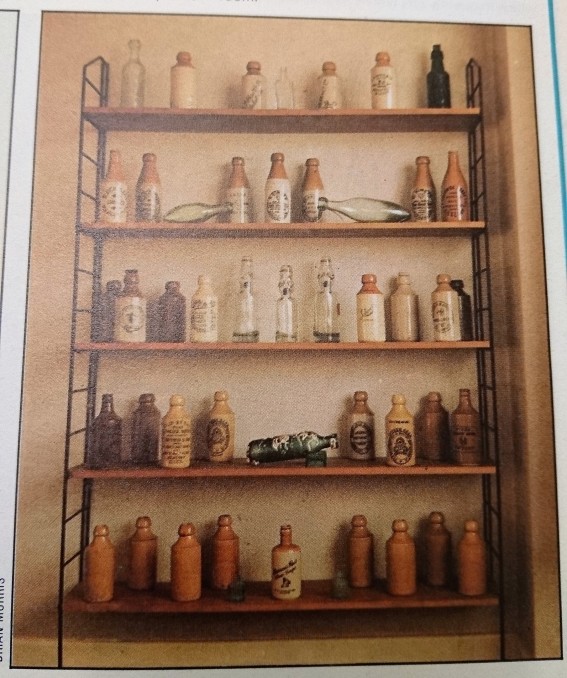 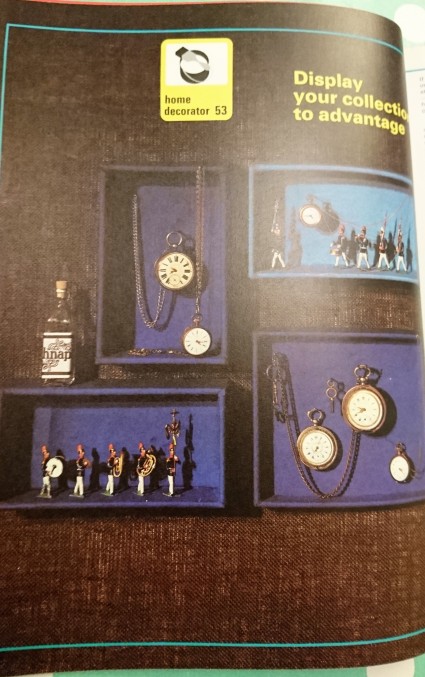 I love those shelves the bottles are displayed on, they look like Ladderex or something similar. The painted boxes… Hmmm, could I convince Aidan to let me put my Italian donkeys out on something like this? We actually had this conversation the other day, and it went something along the lines of, “Can I put my donkeys in the new kitchen?” “No.” 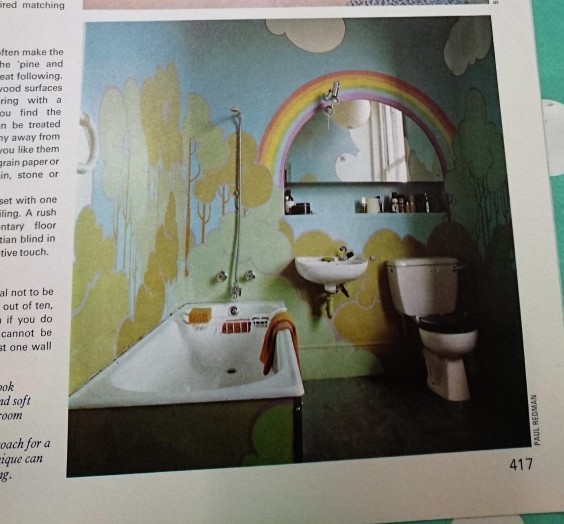 What a bathroom then?

I’ve just realised looking at those two pictures that it’s the same bathroom suite, so they must have just redecorated the same rooms for the different ideas and articles, rather than featuring real ones that had been done. The colours in those bathrooms are something else though: I can’t decide which one I like the most. Possibly the woodland themed one?

The magazines are aimed at DIY enthusiasts, so the point is that all of the ideas that are featured are meant to be doable in your own home. There are tutorials on many things featured, if you fancy giving it a go yourself. Apparently, this paint effect is quite achievable:

There is actually a tutorial on how to create that. I love it. If we didn’t have kids who would wreck it all, and I wasn’t so rubbish at DIY, yeah, of course I’d have a go at this…! I bet they made those chairs themselves too. 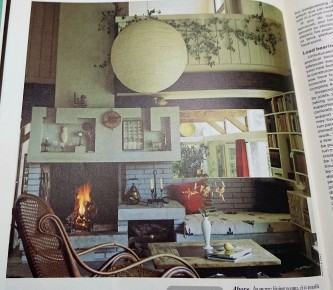 Plenty of retro home decor ideas to be found on these pages. Some of them look doable, and there are quite a few of the rooms featured that I think would still look good nowadays. I’m not sure about those inflatable chairs, but I did have a pink one in the ’90s so maybe even those could come back again.

My favourites are the grey dining room painted with pinks, and the kids room featuring animals. Which ones are yours?