I’m actually going to annoy myself today by singing that over and over and over… good job there’s no-one else here yet.

Just to prove to you that the West German Pottery designers really did  take their inspiration from anything and everything: rocks included.

ES Keramik are one of those factories that, until more recently, we never had anything interesting or decent enough to keep. Finally, we’ve started to accrue a few pieces. Some of these will undoubtedly get sold – though the rocks are definitely here to stay. 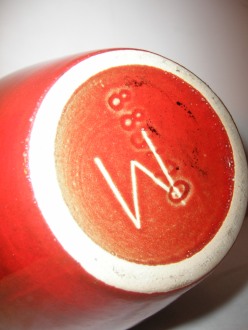 This next one has a brilliant glaze to it:

It looks as if the designer allowed his or her child to splatter the pot with thick, gooey paint and then decided to keep it. It is a good’un though.

Within three pots, you can see the immense diversity that continues to show up, and indeed push the collecting market within West German Pottery to thrive. There are so many thousands of varities; you can be sucked into collecting in all kinds of different ways.

Not that I mind of course…